I am considering applying for a manager of TLE. Can someone possible helpme to educate myself with different specifications of duties and responsibilities so if i am asked i can answer and know what im talking about please
Hi There! I'm Michael, I am a cashier at my local supercenter and am interested as a CSM (Customer Service Managers).

I have a few questions about the policy. I am currently a minor and one of the better cashiers at my local store and have been at my store for almost a year. I started on Jan. 9, 2016 and around october i started to show interest in a CSM position once I turned 18. The way my managers are saying and I'm not sure what they mean. I turn 18 in Febraury of 2017 and Graduate High School in May/June. Do I have to wait until I am out of school or can I be promoted to a CSM as soon as I turned 18. All of the Front-End CSMs have already approved me to go for the position and are more than happy and willing to train me. I also know a lot about the front end since I am almost near and CSM/ Front-End ZS and always learning. They have started to train me for the little things like outlining, Phone Etiquette, Dealing with front-end problems and planning for the day. My FEZS has been pushing me really hard and stressing me and is more than pleased with my work ethic, performance and kindness. My new Assistant Manager is also agreeing on making me a CSM. Whenever there is something that NEEDS done, one of the CSMs or My Front-End ZS will come and ask me to do it because they know I can do it, get it done, and in a timely manner.

If anyone can answer if I must wait until I have graduated or not, then please comment below and help me.
I am looking to connect with people who are service writers at Walmart 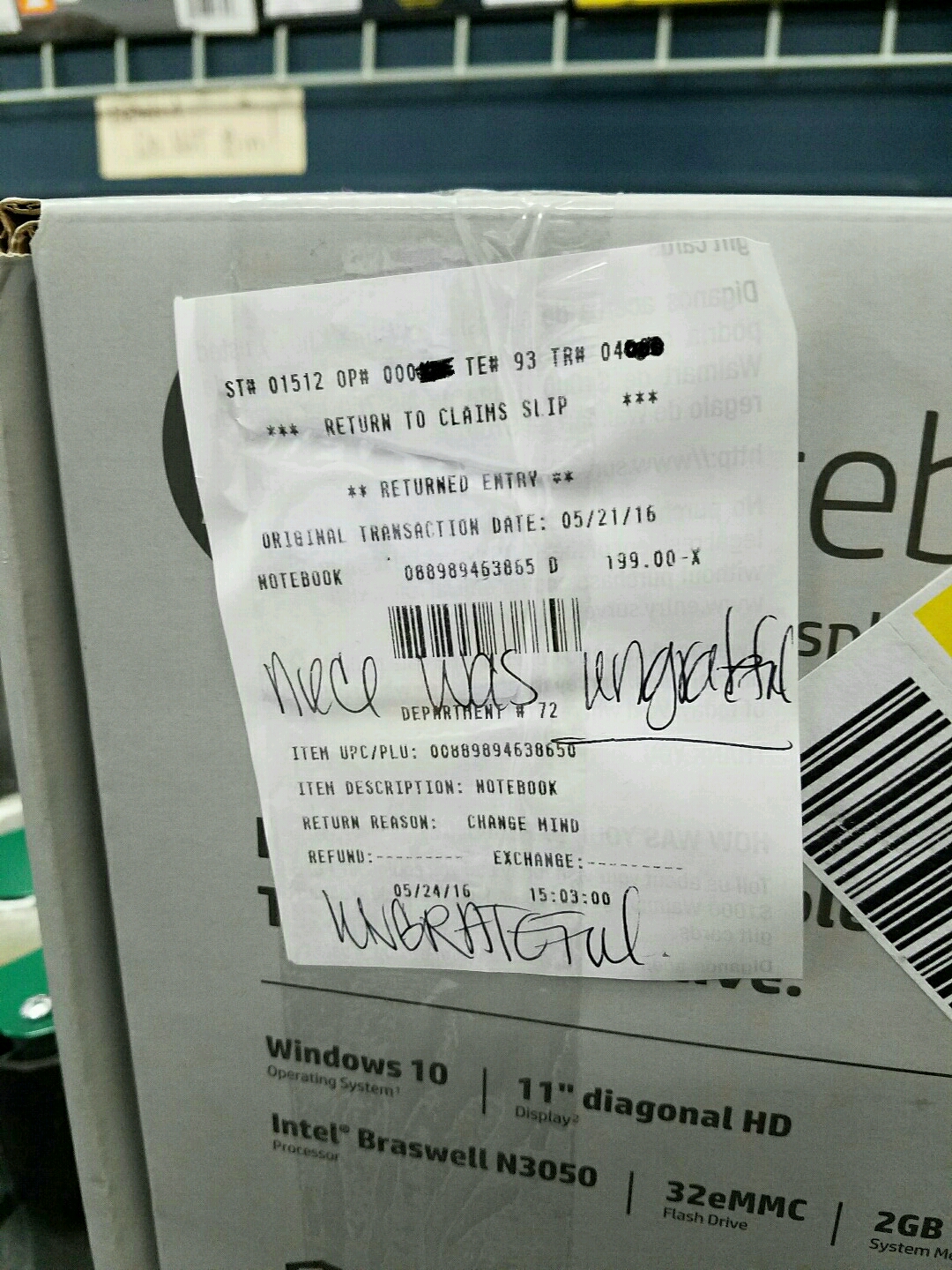 Just going to leave this here

Anyone by chance know the base pay for Connection Center? The only thing I can figure is find out what the base rate for cashiers are then add 50 cents [as I got a 50 cent raise going from cashier to Connection Center].

Anyone else hear about this rate going up?

There are days where I think my store manager makes up of changes rules on a whim to suit himself more than others. Right now he has a rule (okay it's been a rule for about a year now but still) that vacations "must fall during a walmart week" ... And if you're like me and try to schedule your vacations around weekend things (conventions, fan club events etc) you're SOL because you can't take the couple days before or after your week of vacation to make it work. Or have your vacation start in the middle/end of one week and end at the beginning/middle of the second. (Even though I would miss LESS days that way).

From what I've been told by a couple people who have worked at this store longer than this manager and one who has been at three different stores in two states over 15 years, this is a "[store manager] thing" .... So now I have to prune down my vacation and possibly just request it differently and not use my vacation days (one in May) just so I can get the time I need for it. (Wouldn't be so bad if it weren't so expensive to fly).

I requested the first week of February off, And the Thursday and Friday off before it because of a convention I'm going to. Even if I had it planned the week leading up to said event, I still would have needed Saturday and Sunday off.

My assistant manager didn't even tell me about this until this past Saturday, even though I've been asking her since around Thanksgiving or so. Luckily I explained to my SM that I'm willing to give up my Thursday, (I just won't be able to come in until after my friend comes in on the greyhound) as long as I can have Friday. Which he said I could have. So mehhh

So. Are your stores being kinda persnickity with the "No Overtime" rule? Are they also always scheduling a skeleton crew? Good, it's not just my store then.

Okay, ours isn't as much of a skeleton crew as much as we're always -3 or -4 people down we're supposed to be.

I'm Connection Center. Love it. Especially now after our Day guy got another job, so now he works evenings. So I get to be the primary person in phones. [Yay, I actually get to do the job I'm paid for]. The only down side? Our store manager didn't like the fact that he got a new job, so the powers that be gave him two choices, either take a pay cut and go to Electronics, or quit. [Instead of letting him stay as CC so we have coverage. Let him basically take my position where he could be scheduled electronics but still get his CC pay]. We have one lady who works mostly in the photo lab [but can cover me during the day if needed] but this time a year, it's extra crazy because of layaway and holidays. And we have our other lady who works Friday evenings, every other Saturday and every Sunday in phones.

So guess who got nearly an hour of overtime because we didn't have someone to take over? If you're guessing me, congrats, you win a sticker. It's used, and kinda furry, but there ya go.

It wasn't me farting around and being stupid, I was actually taking care of customers. I was on the phone trying to get information from Straight Talk [like pulling teeth, i swear] and helping my customer. Who felt bad he was keeping me from going home. He even offered to come back later, But I didn't think that the other lady would take so long. She had to do a pick up today, then customers kept grabbing him to do things.

I told an assistant manager, I told my Department Manager. I do plan on talking to my store manager when I see him on Monday. [Not sure how I managed it, but I was able to get this weekend off]. Mostly to cover my butt. If they look at the cameras from 6-6:45 they would see me at my counter with a customer. [I had to print something out in personnel so that took that last 10 minutes haha].

Hopefully my store manager will be happy that i was helping a customer instead of being stupid.
I'm a new Wal Mart associate and was told by one of my managers that anyone can access the company's online SOPs at any time from any computer, but I haven't been able to figure out where/how to do this when I'm not at a store computer. The OJT I'm getting (Homelines) isn't very good so I really would like to read the SOPs on my own time, since they don't want me to do it while I'm on the clock.

Does anyone know where/how to access the SOPs from a non-company computer?

Some days I'm convinced my AP guy and Store manager are insane. They had us take all but one of the prepaid phones and cases off the peg hooks. And we can't have any merchandise behind the phone counter. Then again, we don't have any laptops to display, so we're losing sales on that too.

Instead of, you know, getting us better cases?